Israel and Iran on the Brink? Pray for the Peace of Jerusalem 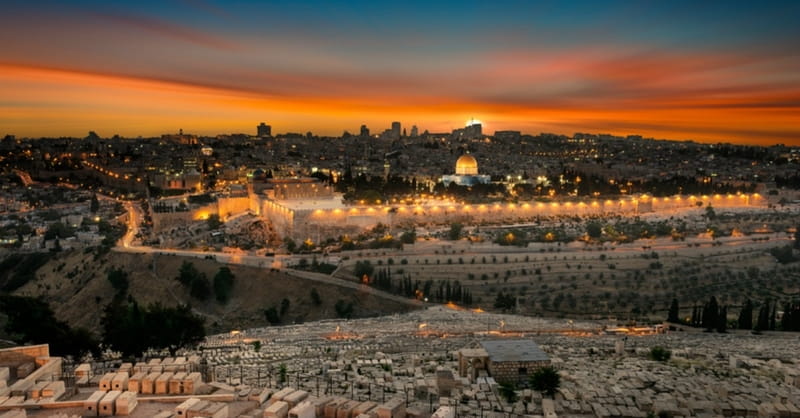 The Middle East is a complicated place—okay, that’s what’s known as an understatement. Not only is there the civil war in Yemen, with Saudi Arabia duking it out with Iranian-backed forces, protests are flaring up in Gaza, and the terrorist group Hezbollah is gaining political ascendancy in Lebanon. The U.S. may be followed by other nations in moving embassies to Jerusalem, and the Trump Administration just announced it is pulling out of the Iranian nuclear deal.

But the most significant and confusing events right now may be in Syria. Syria’s civil war has cost an estimated half-million lives and has displaced a wave of refugees the likes of which we haven’t seen since World War II.

As I speak, within Syria’s borders are the following cast of characters: Kurds rebelling against Syrian dictator Bashar al-Assad; Turks seeking to crush any Kurdish idea of forming a state; remnants of ISIS are there, as are Russians, American troops, and Sunni fighters, including Al-Qaeda.

And if that weren’t enough, the Shiite terrorist organization Hezbollah is in Syria as well, fighting for Assad. And of course, there’s the Syrian military, with a proven propensity for using chemical weapons on its own people.

But perhaps most ominous of all, forces of the Islamic Republic of Iran—Israel’s sworn enemy—have used the Syrian civil war to attempt to establish a permanent military presence on Israel’s doorstep, complete with Revolutionary Guards, drones, naval bases, and offensive missiles.

Given the consistent threats of Iranian supreme leader Ali Khamenei to turn Tel Aviv into dust, a permanent Iranian military presence in Syria is clearly a red line for the Israelis.

According to all the analysis, I’ve read, neither Israel nor Iran want an all-out war. Okay—I have my doubts about Iran. And the kindling is piling up. A spark of any kind could ignite a major conflagration in the Middle East.

We all should pray that doesn’t happen.

So far, the signs aren’t good. Last week, the Israeli Defense Forces shot down what they claimed was an armed Iranian drone over Israel. In response, the IDF then destroyed the base where the drone was launched, killing Iranian military in the process. To retaliate, Iran’s so-called “elite” Quds Force launched 20 missiles at Israeli military posts in the Golan Heights. Israel responded with a massive wave of air and missile strikes against Iranian military targets around Syria.

The Trump Administration has made clear that the United States will stand firmly on the side of Israel, as we should. Not only is Israel our only true ally in the Middle East, it’s the sole stable democracy, surrounded by Islamist dictatorships, secular dictatorships, terrorist organizations like Hezbollah and the Palestinian Hamas, as well as the chaos in Syria.

American Christians have long stood with the Jewish state. In fact, years ago on this program, here’s what Chuck Colson had to say:

We must recall the words of Genesis 12, verses 1 and 2, regarding the ancient Israelites. God says, “I will bless those who bless you, and whoever curses you I will curse.” Of course, we mustn’t confuse the modern nation-state of Israel with the people of the Old Covenant. But it’s clear in Romans 10 and 11 that Paul understands God’s special concern for the Jews. Certainly America’s own sense of decency demands that we help protect Israel—the Jewish homeland and the only true democracy in the Middle East.

If ever there were a time to take seriously the injunction of the psalmist, this would be such a time: “Pray for the peace of Jerusalem. May those who love you be secure. May there be peace within your walls and security within your citadels” (Psalm 122). AMEN!