What Do Evangelicals Want from Trump on Foreign Policy? 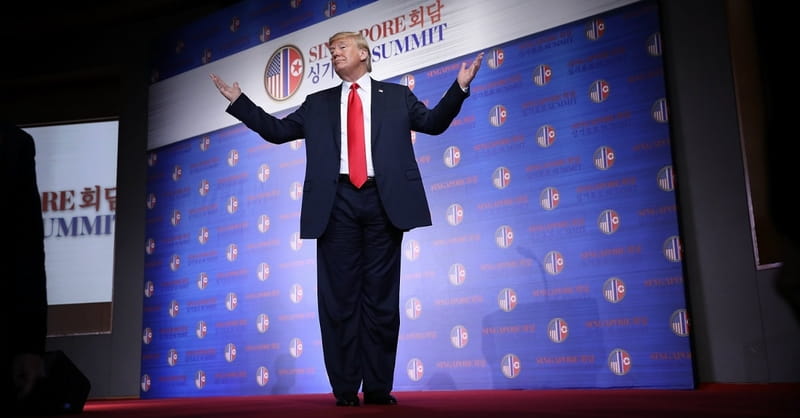 President Trump met with an avowed enemy with great fanfare this week, following a blast of fiery tweets aimed at the Group of Seven nations meeting in Quebec last week.

Meanwhile, halfway through his second year as president, Trump’s domestic agenda has largely run its course.

Of all the voters that put Trump into the White House, the happiest bunch to this point might be evangelical Christians.

Name any of the administration’s achievements — the successful nomination of Neil Gorsuch to the Supreme Court, say, or an executive order rolling back an Obamacare requirement for employers to ensure women’s birth control coverage or even last year’s massive tax cut —  and it is likely to be something on which evangelicals staked their vote for a thrice-married New York billionaire.

Now evangelical Protestants must come to terms with the truism that the American presidency, by design and by evolution, has more power and latitude in foreign relations than it does at home.

Certainly, there are lower court judicial appointments to be made and advantages to seeking in further small-government rule-making. While he may get another shot at nominating a new justice, his legislative prospects are dim: The next speaker of the House, presuming he or she is a Republican, will surely be as hamstrung as the retiring Paul Ryan.

This political reality poses a provocative question for white evangelical Protestants, who went 81 percent for Trump in 2016. What do American evangelicals want out of foreign policy?

Evangelicals are so closely tied to culture-war issues like abortion and same-sex marriage that we forget to connect them to any international policy. Yet evangelicals do have an agenda for the rest of the world.

In its most hopeful and generous self-expression, an evangelical foreign policy prioritizes human dignity, government as a God-ordained protector of the communal order, responsibility for poor and vulnerable people and the imperative to protect human freedom.

During the George W. Bush administration, evangelicals urged the president to combat HIV/AIDS in Africa and fight human trafficking. While they had less influence in the Obama White House, an innovative ecumenical alliance called the Evangelical Immigration Table sought comprehensive immigration reform, adopting principles that most evangelicals affirmed.

Evangelicals have also cheered as the Obama administration, prompted by the bipartisan U.S. Commission on International Religious Freedom, has opposed blasphemy laws, advocated for prisoners of conscience and condemned human rights abuses. Established in 1998 under President Clinton, the commission has long had considerable support from evangelicals.

Yet American evangelicals lag behind the Catholic Church, their frequent partners on sexuality and gender issues, in thinking systematically about international relations. They are often slow to extend the religious freedom protections they demand themselves to foreign groups. White evangelicals, for instance, largely supported Trump’s proposed temporary ban on Muslims from other countries entering the United States.

But more broadly, their overwhelming support for the president leads to incoherence on foreign affairs. Trump’s nativist rhetoric and policies should offend their values. His “America first” appeals are out of sync with an evangelical view of the rest of the globe as a mission field.

One sign of a growing maturity on these matters is a 2-year-old magazine, Providence, sponsored by the Institute on Religion and Democracy and the Philos Project, two Christian organizations funded by conservative donors.

Providence focuses on Christianity and American foreign policy, filling a gap left by what it considers liberal Protestants’ de facto pacifism and abdication from realistic engagement in issues of war and peace.

In its pages, experts such as Rebeccah Heinrichs and Walter Russell Mead debate military issues, human rights and the promotion of democracy. Recent articles examined “Protestant Roots of U.S. Foreign Policy Divisions” and “American Power and the Ways the World Ends.”

I asked Chelsen Vicari, evangelical program director at the Institute on Religion and Democracy, about how evangelicals’ foreign policy goals match with those of the Trump administration. She pointed to the high degree of consensus on religious freedom while noting its lack on issues like trade and nuclear nonproliferation.

Even where evangelicals’ opinions differ, Vicari told me, they are motivated by a desire for human flourishing around the world.

Evangelicals share “the belief that every person is created in God’s image with dignity, loved by Him and in need of salvation through His Son Jesus Christ.”

Which brings us back to Trump. Earlier this year, in a meeting with lawmakers on immigration issues, the president referred to certain poor nations with nonwhite populations as “shithole countries.”

If evangelicals are to embrace a more cohesive foreign policy, they will have to accept that some of Trump’s policies are as un-Christian as his manners. He may yet deliver them “wins” on foreign policy as he did on domestic issues, but it could come at a cost to their reputation, and the integrity of their witness.

Jacob Lupfer, a frequent commentator on religion and politics, is a writer and consultant in Baltimore. His website is www.jacoblupfer.com. Follow him on Twitter at @jlupf. The views expressed in this commentary do not necessarily represent those of Religion News Service.

Photo: President Donald Trump answers a final question while departing a press conference following his historic meeting with North Korean leader Kim Jong-un June 12, 2018, in Singapore. Trump described his meeting with Kim as ‘better than anyone could have expected.’