Security Camera Appears to Have Captured a Guardian Angel 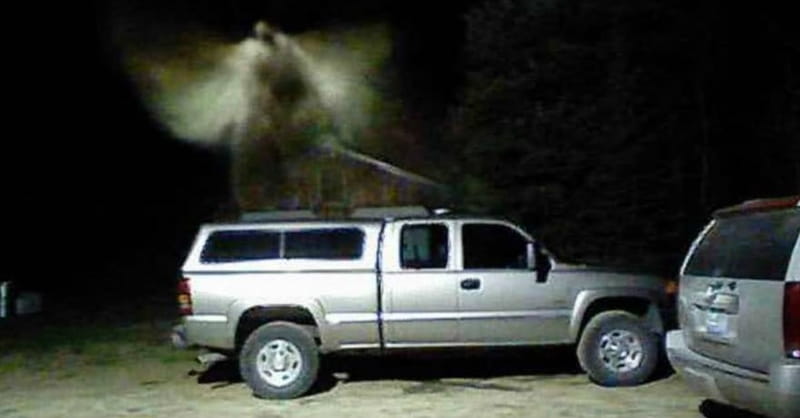 A pastor in East Jordan, Michigan has posted photos that appear to show a guardian angel above a vehicle. The pastor says the wispy outline in the photo is evidence of God’s protection.

The pastor’s church, Jordan Rivers, posted the photos to Facebook with the caption:

“Last night at the Thorman’s house, the security camera recorded this snapshot. Glen Thorman is the fire chief for East Jordan …( they attend Jordan Rivers) Yep folks… It’s an angel. I guess there is no question who is watching over their residence while they sleep, and yes, they pray that The Angels of the Lord will surround them and their property…These photo’s [sic] have not been altered in any way. The second photo, the security camera also shot because the angel was moving away. The camera is designed to photograph anything in motion or unusual…. lots of tears today when they opened the security on their camera …WOW!”

Some believe the object captured by the security camera was only a moth, but the pastor and his church are convinced it is a sign from God, and that the temperature at the time the photo was taken was too cold for a moth to be out.

“We have studied the photo from all possibilities. This ‘Being’ is behind the truck with translucent wings. We checked the temp at 12:49 am for this location. 46* was predicted in town, 39* degrees at the Thorman’s perhaps lower, but the average for his home is a 7 degrees difference in temperature. (Their home is out in the sticks which is much colder than us near Lake Charlevoix) The photograph was taken early morning on the 9th. @ 12:49… And it’s believed the ground was still cold.”

Even if the image in the photo is only a moth, the fact that it looks like an angel can still be a reassurance of God’s protection and an encouragement to many.