US wants UN inquiry into use of chemical weapons in Syria

The US wants a UN Security Council vote Tuesday on a US draft resolution to establish a new inquiry into who is to blame for using chemical weapons in Syria, diplomats said. The move comes after a suspected chemical attack on Douma killed dozens. 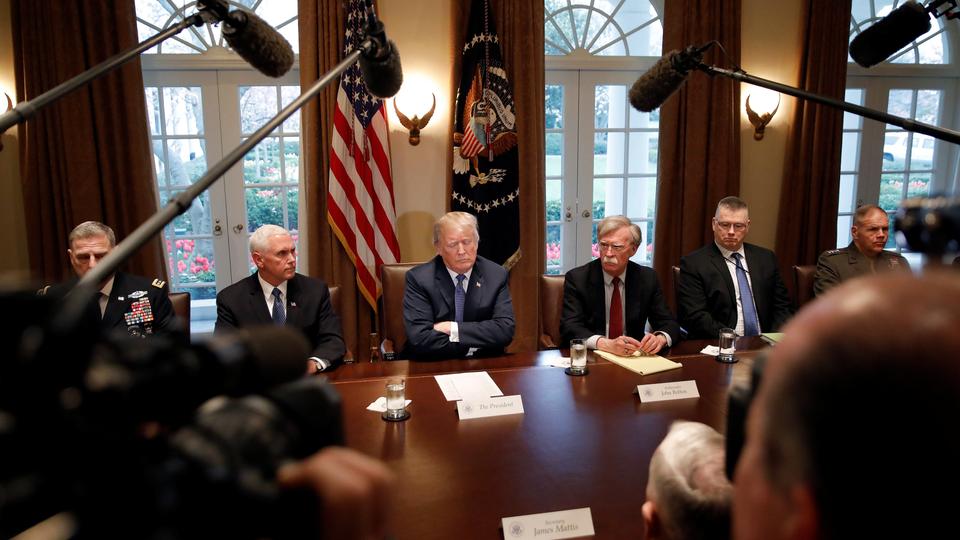 President Donald Trump is threatening an imminent military strike against Syria, vowing to respond “forcefully” to Saturday’s alleged chemical weapons attack in the Syrian town of Douma and warning that Russia or any other nation found to share responsibility will “pay a price.”

The suspected chemical weapons attack late on Saturday killed at least 40 people, with more than 1,000 injured at several sites in Douma, a small town near the capital Damascus, according to rescuers and medics.

Trump met with his cabinet and vowed to make “major decisions” within the next 24 to 48 hours, amid mounting speculation about a US military response.

In New York, the UN Security Council met after Washington urged the international community to approve a probe into an alleged attack on Douma.

The UN Security Council weighed whether to hold a vote on Tuesday on a US proposal to investigate chemical weapons attacks in Syria, setting up a clash with Russia, which could decide to veto the measure, diplomats said.

The UN Security Council president said experts are working on a resolution on the continuing use of chemical weapons in Syria.

US Ambassador Nikki Haley told Security Council diplomats that the United States wanted a vote on the measure, even though Russia said it contained “some unacceptable elements.”

Earlier, Trump had condemned what he said had been a “heinous attack on innocent” Syrians, after reports emerged of women and children choking to death in agony, adding: “This is about humanity — it can’t be allowed to happen.”

Asked whether Russia’s President Vladimir Putin bore some of the responsibility for the latest attack to be blamed on his ally Bashar al Assad’s regime, Trump said: “He may, and if he does it’s going to be very tough.” “Everybody is going to pay a price. He will. Everybody will,” the US president added.

White House spokeswoman Sarah Sanders later made the warning even more explicit, saying: “Russia and Iran also bear responsibility for these acts since they would not be possible without their material support.”

During a stormy council meeting, the Russian ambassador warned that a US military strike against Syria could have “grave repercussions” and stressed that the use of chlorine or sarin had not been confirmed in the attack.

Moscow had formally warned the United States that it would not allow its forces on the ground in Syria to be put at risk, said Russia’s UN Ambassador Vassily Nebenzia.

“From what we hear now, I am afraid they are looking for a military option, which is very, very dangerous,” Nebenzia told reporters following an emergency council meeting.

“Armed force under mendacious pretext against Syria… where Russian troops have been deployed could lead to grave repercussions,” Nebenzia said.

International bodies led by the Organisation for the Prohibition of Chemical Weapons (OPCW) were trying to establish exactly what happened in Douma.

The Syrian regime also has denied involvement in the attack.

But Haley demanded action. “We have reached the moment when the world must see justice done,” she declared.

On April 7, 2017, almost exactly a year ago, Trump ordered the US Navy to target a Syrian airbase with cruise missiles in the wake of a similar attack that the UN chemical weapons watchdog OPCW later pinned on Assad’s regime.

British Foreign Secretary Boris Johnson spoke by telephone with acting US Secretary of State John Sullivan and, according to London, they agreed that “this attack bore hallmarks of previous chemical weapons attacks by the Assad regime.”

As the UN debate took place, a huge blast tore through a multi-story building in the city of Idlib, in northern Syria.

The cause of the explosion was not immediately apparent, but the Britain-based Syrian Observatory for Human Rights (SOHR) said at least 19 people had been killed and another 80 wounded.

Several buses of detainees arrived in Damascus overnight after having been freed by Jaish al Islam, and militants were being evacuated in a parallel operation on Monday, SANA said.

Since February 18, Syrian regime forces have been carrying out an offensive against eastern Ghouta that has killed more than 1,700 civilians and cornered militants in their last holdout of Douma.

Syrian regime and its ally Iran have accused Israel of carrying out the attack on the Tiyas, or T-4, air base near Homs – something that Israel has not confirmed or denied.

“It seems the US government is looking for an excuse for military intervention,” Iran’s foreign minister, Mohammad Javad Zarif, said has he arrived in Brazil early on Tuesday, according to state media.

“Iran’s stance on chemical weapons is clear and we condemn any use of them against any target,” Zarif added.

The bodies of the Iranians, described as military advisers, had been flown back to Iran and funerals would take place later on Tuesday, Tasnim said. Earlier Iranian media reports said four personnel were killed.

With Washington and Paris expected to respond, an apparent Israeli strike on a Syrian regime air base early on Monday initially raised speculation that US punitive raids had already begun.