Israeli troops kill one and wound over 500 Gaza protesters

Gaza health officials say a Palestinian man was killed and at least 528 people hurt, including 122 by Israeli live fire, during ‘right of return’ protests. 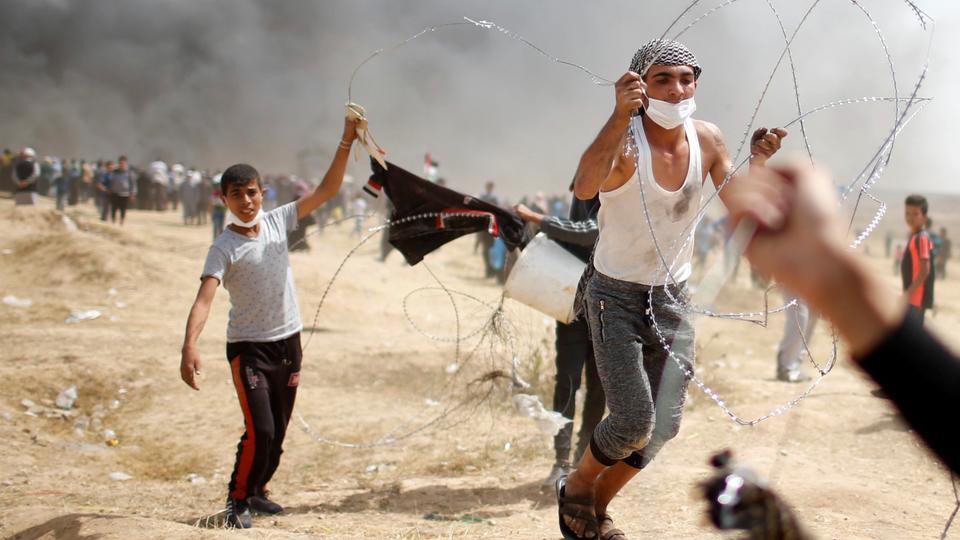 Thousands of Palestinians staged a mass protest along Gaza’s sealed border with Israel on Friday, some burning Israeli flags while Israeli soldiers fired tear gas and live bullets, killing one and wounding hundreds, from across the border fence.

Gaza health officials said Islam Herzallah, 28, was shot by Israeli troops east of Gaza City and transported to a hospital where he died, adding 528 people were hurt, including 122 by Israeli live fire, in the third large-scale protest in as many consecutive Fridays.

Such weekly demonstrations are to continue to mid-May, keeping tensions high along the volatile border.

The health officials said that among those hurt Friday was a Gaza journalist who was in serious condition with a bullet wound in the abdomen.

The marchers are protesting against the blockade of the enclave, but are also asserting what they say is a “right of return” of Palestinian refugees and their descendants to the areas occupied by Israel.

In all, 35 Palestinians were killed in the past two weeks, 28 during protests. Seven were killed in other circumstances, including six militants allegedly in an apparent bid to carry out attacks on Israeli troops.

Sumaya Abu Awad, 36, who attended the protest with her three daughters and son, said, “I am not afraid of death because there is no life in Gaza already”.

On Friday, most of the demonstrators assembled in five tent camps located several hundred meters from the border fence.

The military said that demonstrators hurled an explosive device and several firebombs near the fence in what it said was an apparent attempt to damage it.

Rights groups have branded the Israeli military’s open-fire regulations as unlawful, saying they permit soldiers to use potentially lethal force against unarmed protesters.

Israel has accused Gaza’s Hamas rulers of using the protests as a cover for attacks and says snipers only target the main “instigators.”

The marches have been organized by Hamas, but large turnouts on two preceding Fridays were also driven by desperation among the territory’s 2 million residents.

Gaza has endured a border blockade by Israel and Egypt since Hamas overran the territory in 2007, a year after winning Palestinian parliament elections.

The blockade has driven Gaza deeper into poverty, with unemployment approaching 50 percent and electricity available for less than five hours a day.

In the camp, 37-year-old construction worker Omar Hamada said he is protesting to draw world attention to Gaza and get the border reopened.

“We want to live like everyone else in the world,” he said. “We came here so the world can see us and know that life here is miserable and that there should be a solution.”

“The Israeli authorities must put an immediate end to the excessive and lethal force being used to suppress Palestinian demonstrations in Gaza,” Amnesty International said on Friday.

Gaza’s Health Ministry said more than 1,300 Palestinians were wounded by live fire in the past two weeks.

The Israeli military has argued that Gaza militant groups are trying to turn the border area into a combat zone, and said it has a right to defend its sovereign border. It has said that soldiers fire live bullets as a last resort, in a “precise and measured manner.”

The Israeli rights group B’Tselem said on Friday that open-fire policy must not be dictated by worst case scenarios, such as a feared mass breach of the border.

“An order to open live fire at unarmed protesters is manifestly unlawful,” it said.

Another Israeli group, Breaking The Silence, published a statement by five former snipers in the Israeli military who said they were “filled with shame and sorrow” over the recent incidents in Gaza.

“Instructing snipers to shoot to kill unarmed demonstrators who pose no danger to human life, is another product of the occupation and military rule over millions of Palestinian people, as well as of our country’s callous leadership, and derailed moral path,” said the statement.

The group has been criticised in Israel for publishing often anonymous testimony by current or former Israeli soldiers who have misgivings about their military service and treatment of Palestinians.

On Friday, hundreds of Jordanians demonstrated in Amman in solidarity with Palestinians.

“The aim behind the demonstration is to support the Palestinian nation and to emphasise on the right of return (of Palestinian refugees to what is now Israel). Jordan is the twin of Palestine,” said Jammel Abu Baker of the Islamic movement.

“We fully support the efforts of Palestinian people in stressing their rights, their return, that their capital is Jerusalem and to oppose the conspiracy deal, the so-called century deal.”